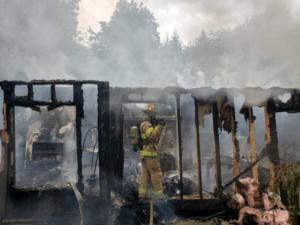 Responders are at the scene of a residential fire north of La Center that displaced two people, according to emergency radio traffic monitored at The Columbian.

The initial call came in as some trees on fire, but the first arriving crew found a home in flames, said Chief John Nohr.

As of 4 p.m., firefighters were still at the address. The fire was under control quickly, but crews continue to douse hot debris with water, according to radio traffic.

The Red Cross was called in to help the two displaced people.