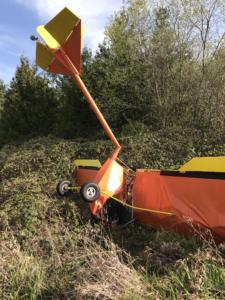 A pilot was killed Monday morning when his ultralight aircraft crashed near a private airstrip in north Clark County.

The crash was reported about 9:20 a.m. near Daybreak Airport, near the 4100 block of Northeast JA Moore Road between Battle Ground and La Center. A witness reported that the craft had come down near power lines west of the airstrip.

“It would appear that it impacted straight into the ground,” Clark County Fire & Rescue Chief John Nohr said.

Emergency crews and deputies located the aircraft, which had crashed several hundred yards from the runway in some brush alongside the East Fork of the Lewis River, according to a statement from the sheriff’s office. The pilot and lone occupant of the airplane was pronounced dead at the scene.

Deputies were at the crash site, and National Transportation Safety Board personnel were notified.

Six Clark County Fire & Rescue personnel, including one fire engine; a ladder truck and a battalion chief; responded along with medical personnel. Fire and medical personnel stayed at the scene until they determined that there were no medical needs or potential hazards as a result of the crash, Nohr said.

The incident is under investigation. Notification of next of kin is pending, and the name of the pilot is not being officially released at this time.