Truck crashes into store on St. Johns north of Vancouver 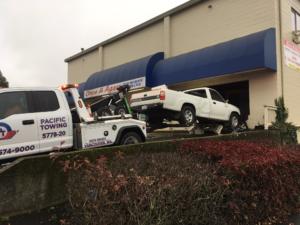 A Toyota pickup crashed into a building on St. Johns Road, north of 78th Street, on Monday morning.

Emergency medical personnel and Clark County sheriff’s deputies were dispatched around 8:15 a.m. for a pickup that struck Once & Again consignment shop, 7903 N.E. St. Johns Road, Suite A, north of Vancouver. The store sells consignment furniture and was not yet open when the crash happened.

A fire crew said the pickup was completely into the building, according to emergency radio traffic monitored at The Columbian.

According to the sheriff’s office, witnesses reported that the Toyota was southbound on St. Johns Road when it rear-ended another vehicle, then took a sharp left turn under full acceleration, driving into the business.

Jennifer Rutledi was working at the Arco gas station next to the consignment shop when she heard a loud boom. She went outside and saw the truck’s bed jutting from the neighboring business.

Co-workers helped clear debris that had fallen from the truck’s bed onto the roadway, Rutledi said. Police and firefighters arrived within minutes, she said, and she kept her distance to let the responders work.

A firefighter requested a gurney for the driver of the Toyota, according to the scanner. The driver was reportedly conscious and alert but complaining of neck and back pain. The injuries don’t appear to be life threatening, the sheriff’s office said.

The cause of the crash is under investigation. An on-scene deputy said it’s unknown why the driver kept his foot on the gas; driver intoxication is being looked into, he said.

Bob Erickson, one of the owners of the building, said he got a call from a tenant about the crash and rushed over. He stood outside a truck-sized hole near the side of the building facing St. Johns Road. Cinder block, glass and pieces of furniture littered the ground inside and outside of the shop.

A tow truck was hooking up a Toyota with a smashed front-end as Erickson commented, “What I see is what I know.” He said he was trying to get in touch with the proprietor of the consignment shop.

This isn’t the first time a vehicle has crashed into the shop, Erickson said. About a dozen years ago, a customer drove into a corner of the shop. A couple years later, it happened again, he said.

The building should be structurally sound despite the latest damage, Erickson said.