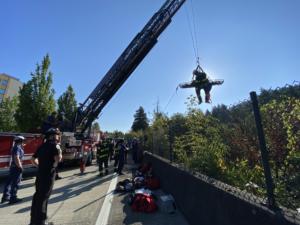 Law enforcement is conducting a death investigation after a missing Vancouver man’s body was found Thursday morning at the bottom of a ravine in Clackamas, Ore.

The 34-year-old man, whose name has not yet been released, was found near Southeast 97th Avenue and Southeast Sunnybrook Boulevard, according to a news release from the Clackamas County Sheriff’s Office.

The man’s mother called 911 about 8:20 p.m. Wednesday to report him missing. He was last seen Tuesday near the Kaiser Permanente Sunnyside campus. A deputy completed a missing-person report, the news release states.

Family members contacted dispatchers Wednesday evening and said they were searching a ravine near where the man was last seen. Shortly after 7 a.m. Thursday, the family called 911 to report finding the man’s body, the sheriff’s office said.

The sheriff’s office responded to the area, and investigators are processing the scene and interviewing family members. Trauma Intervention Program NW and the sheriff’s office chaplain are on scene to assist family and friends, the news release says.

The man’s body was recovered by Clackamas Fire District #1. His name will be released following an autopsy by the medical examiner.

The investigation is ongoing.