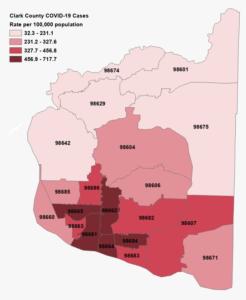 The new cases bring’s Clark County’s total count to 2,160, according to Public Health. The number of deaths held steady at 42.

The new data released Wednesday shows that people in their 20s now represent the largest group of those infected with the novel coronavirus, with 19.1 percent of the cases.

People in their 80s, who represent the highest number of deaths, represented the smallest percentage of cases, with 4.1 percent of the total.

The rate does not reflect the actual number of cases in each ZIP code but projects the total as if there were at least 100,000 people in that area.

Public Health officials stressed in a social media post that the geographic data shows where positive cases live, not where they were exposed. It should not be seen as an indicator of risk.

The county’s infection rate, which measures the number of new cases over a two-week period per 100,000 population is at 88, a level that puts the county in the highest risk category for school openings, according to state health officials. The statistic is updated weekly and was last updated Tuesday.