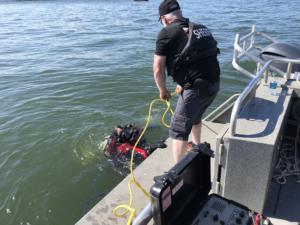 A man is presumed drowned after a speeding boat flipped on the Columbia River on Sunday.

Authorities were called to Broughton Beach in Portland at 2 p.m. for a water rescue. A boat had reportedly flipped while making a high-speed turn, ejecting both people on board. One person swam to shore.

The missing person was not wearing a life jacket, according to the Multnomah County Sheriff’s Office.

Portland Fire and Rescue and the Multnomah County Sheriff’s Office each responded to the scene off Marine Drive just downriver of Portland International Airport.

A water rescue unit from the Vancouver Fire Department was also called to assist. A helicopter also aided in the search.

As of 4:30 p.m., the missing man had not been found. The Multnomah County Sheriff’s Office announced the effort was being considered a recovery operation and that dive teams were at work in the river.

Identities of the presumed victim and the survivor were not released.