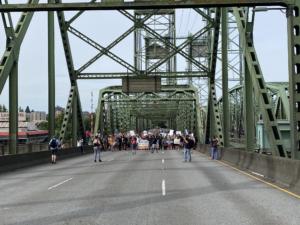 Hundreds of demonstrators commemorating Juneteenth have marched from Esther Short Park to Interstate 5, where they occupied the Interstate 5 Bridge and took a knee in honor of George Floyd and to promote the end of racism in the United States.

The Washington State Patrol and local police have closed the southbound lanes of the freeway to reduce the safety risk to the demonstrators.

“I just feel empowered as a person, as a people,” said Ezekiel Hunt, one of the organizers, as he walked to the center of the old green drawbridge.

“This has never been done before. I feel like my ancestors who marched in Alabama, Montgomery and Georgia. You know, it’s never been done here from Vancouver to Portland, and we’re the first ones to do it, and I’m proud. I’m proud to be a Black man in 2020.”

A group of demonstrators began growing in the park around 4 p.m. By 4:45 p.m. an estimated 250 people were on hand, with more arriving.

Nijel Wilson, from Vancouver, is part of a Portland-based nonprofit called M.A.D. PDX. He said that today’s demonstration is mainly meant to raise awareness for Juneteenth and also to demand racial equality.

After consulting with police, who were assisting with keeping people safe, the demonstrators began marching to the southbound lanes of the freeway around 4:50 p.m., entering by the onramp at Fifth and Washington streets. The crowd stretched for several blocks. They chanted and many held signs as they walked. Many wore masks to reduce the risk of contracting the novel coronavirus.

At midspan, the knelt, then continued walking to the south end of the bridge. By about 5:50 p.m. they were on the march back to Vancouver.

Below the bridge, a few boaters turned out in support of the marchers.

Ozzie George, one of the founders of M.A.D. PDX, said “We’re here to help Black lives and support anything that supports us.” He said they organized a march in Vancouver because “In Portland you hear a lot of great things going on. I just want to do something different.”

“If you’re over there, you’re preaching to the choir. I’m trying to spread the light over here. We have got to show people love is everywhere,” George said.

Although not at the scale of protests seen in cities like Portland and Seattle, there have been protests in support of Black lives almost daily in Clark County for the last two weeks, including in smaller towns such as Camas and Ridgefield. As in the rest of the country, many in the community have been shocked at the death of Floyd, a Black man who died after a Minneapolis police office knelt on his neck for more than seven minutes.

A group of perhaps a dozen counter-demonstrators, including Patriot Prayer leader Joey Gibson, stood on the shoulder of the freeway in the vicinity of Columbia Way and heckled the marchers, then followed them across the bridge on the public sidewalk.