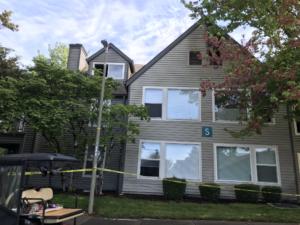 No injuries were reported, but the fire displaced families in eight units, according to the Vancouver Fire Department.

Smokers living in apartments tend to go outside to avoid spreading second-hand smoke, which is good, Scarpelli said, but they often throw their cigarette butts in “materials not conducive to extinguishment.” Cigarette butts should go into water or sand, she said.

Careless disposal of cigarettes or other smoking materials is the second leading cause of fires in the city, Scarpelli added.

“If people are mindful, it can be avoided,” the fire marshal said.

The fire was reported at 1:18 a.m. in the apartment complex at 13314 S.E. 19th St., according to Vancouver fire spokesman Kevin Stromberg. Crews arrived to find fire burning on the patio of a second-story unit of building S, he said, and it was extending into the building’s attic.

Firefighters immediately called in a second alarm and began attacking the attic fire. Stromberg said the fire was brought under control in about 40 minutes.

The fire started on the second-story patio, Scarpelli said, and then breached inside the attached apartment. Several adjacent apartments and the attic space were damaged, she said.

The fire resulted in nearly $193,000 worth of damage, according to the fire marshal. The building did not have sprinklers or a fire alarm system, she said.

The Red Cross was called in to help the displaced residents.