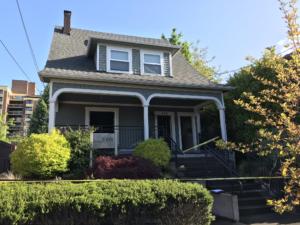 An early morning fire Thursday damaged a house that had been converted to a business near downtown Vancouver, according to the Vancouver Fire Department.

The fire was reported at about 5:45 a.m. at 410 W. 12th St., according to a statement from the fire department. Firefighters arrived to find smoke coming from the first floor and basement of the small, three-story house.

Crews initially fought the fire from the outside until more personnel arrived, then moved inside the building and brought the fire under control in about 10 minutes, the statement said.

“The extinguishment was made more difficult due to the construction type of the structure,” the statement said. “The walls contained no fire blocking, which allowed the fire to run from the basement up inside the walls.”

Five fire engines, one ladder truck and 19 firefighters responded to the blaze.

The building is owned by Chad Burton and Robert Black and used as an office for NewFocus Financial Group. No one was inside the building at the time of the fire, and no injuries were reported.

The fire is being investigated by the Vancouver Fire Marshal’s Office.