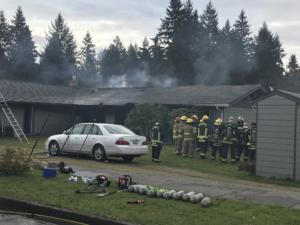 Five residents and a dog were displaced after a house fire Monday morning in the Sifton area.

The Vancouver Fire Department was dispatched at 8:43 a.m. to the single-story house at 14317 N.E. 99th St. All occupants evacuated, and no injuries were reported, according to a fire department news release.

The first engine arrived within five minutes as heavy smoke and flames poured from the front and rear of the structure, according to the news release. Firefighters stretched hose lines to attack the fire from the outside before making their way inside.

Ceiling heat caused some difficulty as firefighters attempted to access flames in the attic, the department said. The fire was extinguished in 24 minutes.

The Clark County Fire Marshal’s Office is investigating the cause of the fire.

Clark County Fire District 3 personnel also responded to the scene. The Red Cross is assisting those affected by the blaze.