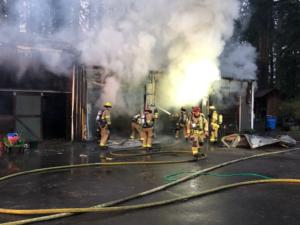 Explosions and flames prompted an emergency response to a burning barn near Battle Ground on Monday.

Clark County Fire & Rescue crews were dispatched at 7:09 p.m. to 6742 N.E. 239th St., west of Battle Ground, for the report of an outbuilding on fire. Multiple callers reported hearing explosions and seeing fire from a distance, according to a new release.

The first crew arrived in six minutes and found a 30-by-60 foot, three-baydoor barn with heavy fire and smoke showing.

There were animals in the barn, but they had all escaped safely before firefighters reached the property, according to the fire department. All that was left inside the building was equipment and hay.

Firefighters initially conducted defensive fire conditions, dousing the flames from the outside because of too much fire and the building’s structural instability, the fire department said.

Additional crews arrived to help, and the fire was brought under control in 20 minutes.

Crews were then able to go into the building to fully extinguish the fire. Firefighters remained on scene for four additional hours to investigate and ensure full extinguishment.

Three Water Tenders were called out to shuttle water from the nearest hydrant, which is about one mile away, according to the fire department.

Two additional fire engines were called to the scene; they were returned to service without working the fire due to defensive operations. Clark County Fire District 3 and the Vancouver Fire Department also responded.

The Clark County Fire Marshal’s Office is investigating the cause.