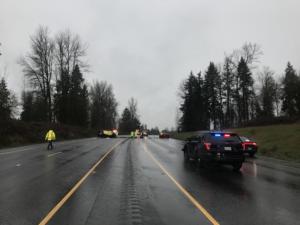 Emergency responders are at the scene of a multiple-vehicle crash with three fatalities, according to emergency radio traffic monitored at The Columbian.

Washington State Patrol Trooper Will Finn tweeted that at least three people were killed and two children were in critical condition.

Deputies and firefighters were dispatched to 16200 block of Northeast 117th Avenue at 3:47 p.m., state Highway 503 in Brush Prairie.

The first arriving responders told dispatchers that it appeared three vehicles were involved and three people were believed dead, according to the radio traffic.

Two people needed to be extricated from vehicles and taken to a hospital, according to the radio traffic. A Life Flight helicopter was requested to respond to the scene but was later canceled.

All lanes of the highway have been blocked until further notice, according to the Washington State Department of Transportation.

C-Tran said in a tweet that Route 7 commuters should expect delays.