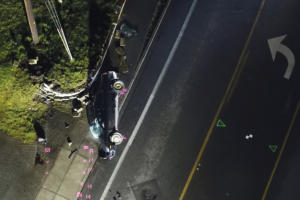 A Vancouver man was killed late Monday night in a single-vehicle, rollover crash in the Salmon Creek area.

Clark County sheriff’s deputies and crews with Clark County Fire District 6 responded about 11:30 p.m. for a collision in the 1400 block of Northeast 117th Street.

Detectives determined that Benjamin Quatier, 29, was driving a 2001 Dodge Neon west on 117th Street from Northeast Highway 99 when he failed to negotiate a curve and lost control of his vehicle, according to the sheriff’s office.

The Dodge left the road to the south and struck a cobblestone retaining wall. Quatier was pronounced dead at the scene, the sheriff’s office said.

Investigators say speed was a factor in the crash.