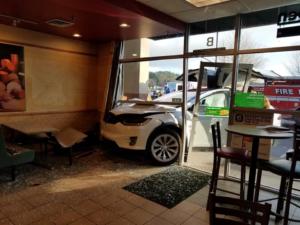 One person was injured Sunday when the car they were riding in crashed into a Subway restaurant in Woodland.

Woodland police responded at 4:06 p.m. to an injury crash in the 1900 block of Pacific Avenue, according to a Facebook post from the police department.

The driver told police his Tesla sedan malfunctioned, causing it to strike the building. Police said no drugs or alcohol were involved in the crash.

A passenger in the car was taken to the hospital with minor injuries. No other injuries were reported.