One person dead in shooting on Fourth Plain in Vancouver 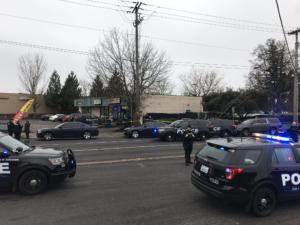 Vancouver police are investigating a fatal shooting at a small strip mall at the corner Fourth Plain Boulevard and Stapleton Road in central Vancouver.

A young man was shot and killed. The victim’s identity has not been released.

Dozens of officers are on the scene, which is barely a block south of the Vancouver Police Department West Precinct offices on Stapleton.

Shots came from a black sedan, occupied by two people, that fled east on Fourth Plain Boulevard, according to emergency radio traffic monitored in the newsroom. The sedan had not been located as of 3 p.m.

Stapleton Road was closed in the area for the investigation, including at state Highway 500. The closure on state Highway 500 ended about 3:345 p.m. Police have the sidewalk on Stapleton blocked. Traffic on Fourth Plain westbound is creeping past the scene.

C-Tran tweeted that The Vine station at westbound Fourth Plain and Stapleton Road is temporarily closed.

Detectives from the Vancouver Police Major Crimes unit are investigating and are attempting to identify and locate the suspect or suspects involved.